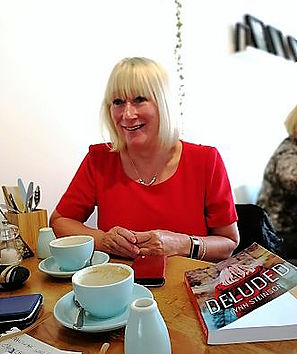 One of our favourite recent reads was the Manchester based psychological thriller ‘Deluded’ by  Lynn Steinson.  We met Lynn recently for a chat about her writing life and the development of her first

‘Deluded’ revolves around the intertwined lives of a pub quiz team, one of whom may not quite what she seems! It is a cracking tale of obsession and deceit with some moments of high drama.  Let’s just say that we could barely breathe for quite a while from page 111 onwards! Don’t want to reveal too much but there is an element of the old film ‘Gaslight’ about the early part of the novel. Main character Lisa has her suspicions about Judith, the alluring older woman with the tragic past, but her doubts are ridiculed by her friends and colleagues who have all fallen under Judith’s spell. So who is ‘deluded’ exactly? Our lips are sealed.

Lynn has been writing for herself for years but finally decided to enrol on the MA in Creative Writing at MMU. She knew that the course would require her to submit a completed novel and hoped that would give her the push to finish a story idea that she had been working on for ages. The result was ‘Deluded’.

Unlike J K Rowling, Lynn didn’t have the beginning, middle and end of ‘Deluded’ planned before writing it. She started with an idea for the middle section and developed the back story and resolution later. Feedback from fellow students during those dreaded read aloud sessions helped and some elements of the novel have been borrowed from popular culture. For example, the dynamic between Lisa and flatmate Maya was inspired by a relationship between TV lawyer Ally McBeal and a work colleague. A pivotal scene in ‘Deluded’ (it’s that stressful episode on page 111!) during which Lisa’s suspicions begin to be shared by her boyfriend Rob is an homage to a scene from The Biederbecke Tapes – a classic Alan Plater TV drama from the late 1980s.

Like all writers Lynn also uses her own experiences. Central character Rob, an attractive young man, just happens to share the same physical appearance as Lynn’s favourite rock god – Jim Morrison!  Lynn used to be a pub quiz regular at the Red Lion in Withington and realised that the elements of competition, the stress and the potential for holding grudges provided a great dynamic for a novel. The quiz scenario also provides a legitimate opportunity for a stranger to enter an already established group of friends thereby bringing together the main characters who are disparate bunch to say the least.

‘Deluded’ is highly visual with places and people being described in vivid detail.  Lynn credits this to an earlier form of the story which was a play she created for an OU course on play writing. Locations and appearances all originated in that version including the red woollen coat that plays an important role in the story. Lynn started to wear one herself as a visual clue for people who she was meeting!

Like so many new writers, Lynn struggled to find an agent or publisher.  One potential publisher rejected the novel with the comment that he only wanted to read thrillers set in exotic places – obviously he had not noticed the growing Manchester literature and film scene! She decided to self publish and is now writing a sequel, facing the considerable challenge of making it coherent for those who have not read the first novel without being boringly repetitious for those who have. Spoiler Alert – the next novel will feature the ‘surviving’ characters and a court case. A passionate Northerner, Lynn is ignoring the publisher’s words and using the city of Manchester as a character in its own right this time!

We always like to ask about other people’s favourite writers and Lynn’s include Ruth Rendell and the thriller writer, James Lasdun,  whose novel – The Horned Man – she describes as a  study in ‘urban paranoia’. Another one for the reading list. https://www.theguardian.com/books/2002/feb/03/fiction.features2